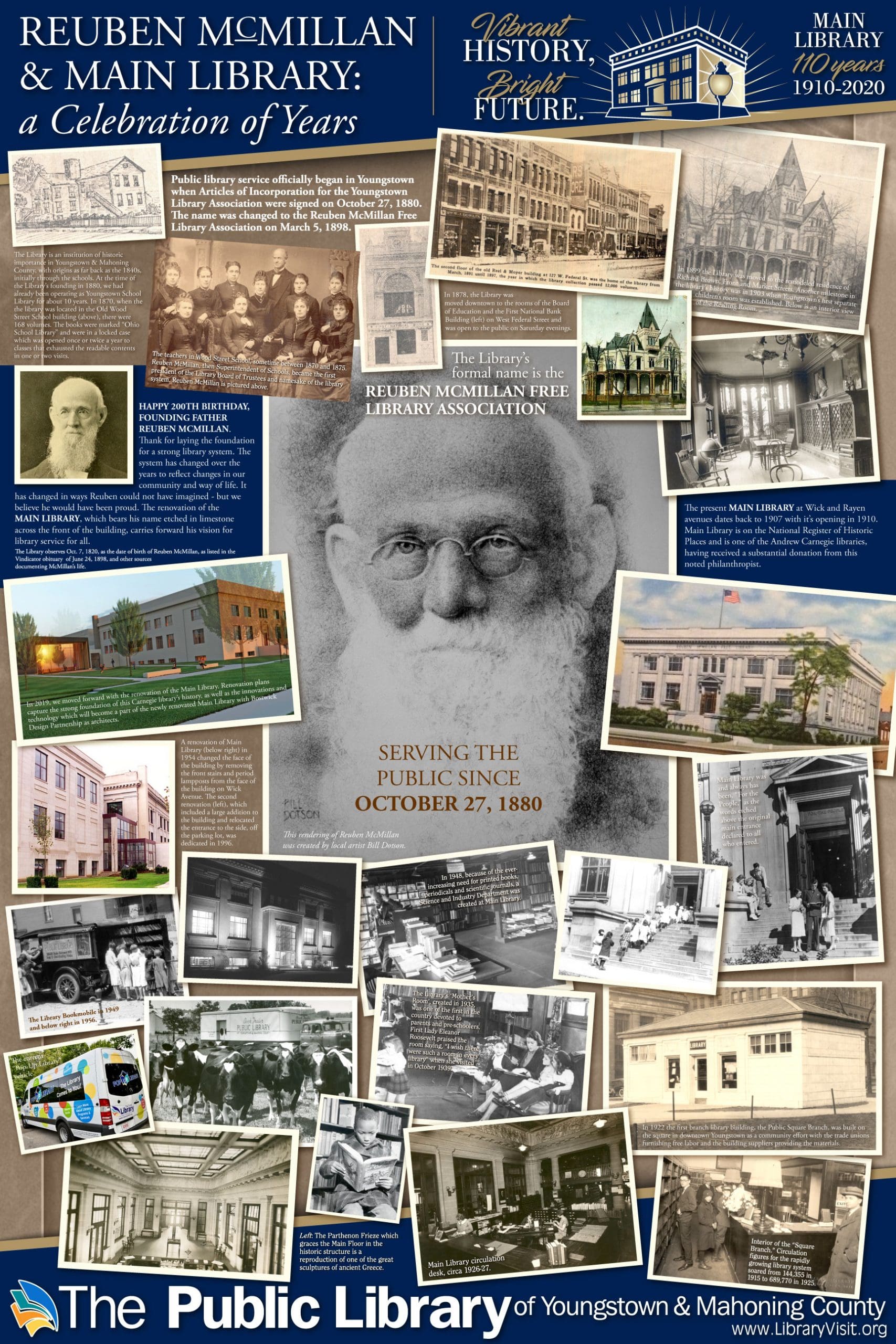 The Library is an institution of historic importance in Youngstown and Mahoning County, with origins as far back as the 1840s, initially through the schools. On Oct. 27, 1880, the Youngstown Library Association became official with the signing of Articles of Incorporation by a group which included Library namesake Reuben McMillan, then Superintendent of Schools. In his memory, the association’s name was changed to the Reuben McMillan Free Library Association on March 5, 1898, and has remained as such. Among the early signers were two Youngstown schoolteachers, two physicians, and Reuben McMillan. Mr. McMillan devoted his life to the intellectual development of the city’s youth. Reuben McMillan also served as president of the Library’s Board of Trustees.

Originally, the two teachers, Miss Pearson and Miss Hitchcock, took charge of the 168 volumes. The library fell under the school board’s control and was housed in a building on West Federal Street until 1898.

However, in 1891, the first true public library service was possible because of support from the first tax appropriations. The home of Richard and Henrietta Brown at Market and Front streets was remodeled for library use. In 1907 the sale of the property, along with a $50,000 gift from Andrew Carnegie, enabled the library to relocate to the Wick and Rayen corner, formerly belonging to W. S. Bonnell. Charles F. Owsley was the architect commissioned to design the present Main Library, which was dedicated Dec. 3, 1910. The historic building underwent extensive remodeling in 1954, and a major renovation and expansion in 1994-96.

One of the most distinguished board presidents was John H. Clarke, who became an associate justice of the U.S. Supreme Court under President Wilson. Miss Anna Louise Morse was the first professional librarian from 1902 to 1914. Under the direction of Joseph L. Wheeler from 1916 to 1926, the library experienced phenomenal growth. The first real estate tax levy was passed in 1920. Clarence W. Sumner, director from 1926 to 1944, began a branch building program within the city.

The library became a free countywide system when the Ohio Legislature reorganized the tax laws giving public libraries support through the intangibles tax and denying them any fixed share of the real estate tax without a special vote. The first county branch opened in Poland in 1935, with others following in rapid succession.

From 1944 to 1964, James C. Foutts led the library through an extensive branch building program, which began with the passage of a tax levy to make library services more convenient for people and shifting populations. After Mr. Foutts’ death in 1964, David W. Griffith completed the building program, taking it even beyond the original plans. Robert H. Donahugh became director in 1979 and Theresa A. Trucksis, who took charge in October 1989, directed the building of the new Boardman branch, completed in 1992, and the new addition and renovation to the Main Library, started in 1994. She was director until 1997.

Carlton A. Sears, director from 1997-2012, produced a new strategic plan which included ensuring that libraries were in the proper place demographically, advancing services and productivity, and strengthening the library system’s place in the community. As part of the plan, the following libraries were built: Poland, Austintown, Springfield, East and Newport.

Heidi M. Daniel was Library Executive Director from July of 2012 to July of 2017. She has furthered the Strategic Plan, encouraged excellence in customer service by finding ways to say “yes,” adding many new programs and services, expanding electronic offerings and much more. She oversaw several building projects, including new Tri-Lakes and Canfield library branches, plus a major renovation of the Boardman branch. Ms. Daniel was named Ohio Librarian of the Year by the Ohio Library Council in 2015.

Library Executive Director Aimee Fifarek began work at PLYMC on December 29, 2017. She is overseeing the long-awaited renovation of the Main Library, a Carnegie library which was opened in 1910, and honors one of the Library’s founding fathers, Reuben McMillan. She completed the new Campbell Library, located inside the Campbell CLWCC (Community Literacy Workforce and Cultural Center), and began the renovation of the Main Library in 2019. Under her leadership, the 2019 Library Levy was passed with an abundance of community support.